Good Morning and welcome to another episode of #ThatBusinessShow with Guest Host Topher Morrison and Co Host Stella Guidicelli. We had a great show on #1250whnz today, and remember that you can catch the show on http://www.tampabayradio.com if you missed the live show on #1250whnz at 8am. Coming on the show today was Bob Circosta, “The Billion Dollar man”, Author of “Life’s A Pitch”. Also joining us on the show was Anthony Amos, Author of “How To Catch A Shark”, and the founder of 5 franchises. Our guest on the last segment was John Heffron, winner of The Last Comic Standing season 2! As always, #ThatBusinessShow invites a variety of successful individuals on the show, if you have interest on being on the show, leave Jamie a message on http://www.tampabayradio.com!

Our first guest on #ThatBusinessShow with Guest Host Topher Morrison and Co Host Stella Guidicelli was Bob Circosta, one of the individuals who helped create the entire TV home shopping industry. Bob was speaking to Topher about how he actually started the business of TV home shopping here in Tampa with a local radio station! That has all led to billions of dollars in sales from home TV shopping, with Bob Circosta by himself counting for one billion dollars in sales and logging 25,000 live hours on television! He invited any of our listeners to head to http://www.HSN.com and to search up his new show, HSN AMERICAN DREAMS, a show where he showcases products from smaller entrepreneurs in order to give them a platform! Just search keyword American Dreams to submit your product. You can learn more about Bob at http://www.bobcircosta.com! If you missed Bob Circosta on #ThatBusinesShow, head to http://www.tamapbayradio.com.

Our next guest on #ThatBusinessShow with Guest Host Topher Morrison was Anthony Amos, Author of “How To Catch A Shark”, and the founder of 5 franchises. Starting when he was just 21, he founded Hydrodog and within 5 years, Hydrodog had grown to over 100 franchises across Australia. It was the first franchise of its kind to be in every State and Territory of Australia. Hydrodog grew to be the largest franchise of its kind in the world at that time, receiving 6,000 new customer calls with a revenue of nearly $10 million annually. Developing into a master franchise, Anthony was telling us how he sold and resold Hydrodog nearly 3 times and eventually bringing it to the United States of America! Anthony told Topher of how now spends his time advising and mentoring other entrepreneurs, teaching them how to take their businesses to the next level and catch their own Shark! He is also traveling around the country with a charity! Learn more about all of Anthony Amos’ ventures at http://www.theanthonyamos.com!

Topher welcomed our last guest on #ThatBusinessShow, John Heffron, a Comedian who shares an array of relatable experiences from childhood through life as a married father. After exchanging some pretty funny banter with Topher, John shared with us some of his stories with dealing with his wife and being on the go all the time as a Comedian, and how people say that being a Comedian is easy- when in reality its an incredibly hard and high stakes career. To check John Heffron out, follow him on twitter @JohnHeffron! If you missed John on #ThatBusinessShow, head over to http://www.tampabayradio.com!

As always, thank you for tuning into #ThatBusinessShow with Jamie Meloni on #1250whnz, weekdays at 8am. If you missed today’s show, you can always visit my website and see all of our shows on demand at http://www.tampabayradio.com or visit my YouTube channel at http://www.youtube.com/jamiemeloni. 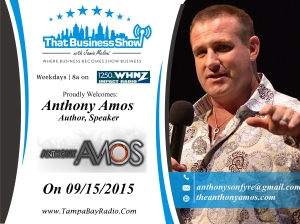 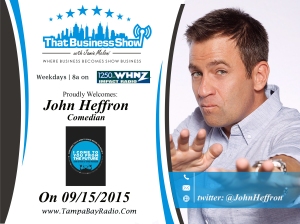 Connnect With Jamie on Social Media 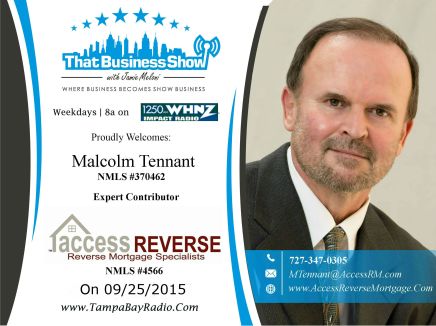 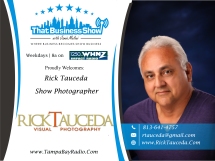 Jessica Rivelli with The Working Women of Tampa bay